Skip to the content
Today at CES, we were surprised with Samsung and its new skin on the “TabPro” line and the “NotePro” tablet line up. What would this mean for the TouchWiz UI that has been with Samsung for a long time? 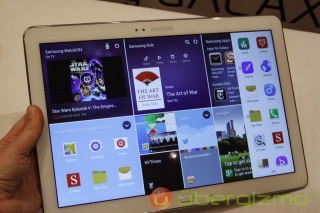 Now, let’s talk about the new Magazine UI first, it was a surprise to everyone to see Samsung did a refresh on their custom UI. And it is, to me anyway, looks better than TouchWiz. But  it also looks a little bit like Windows. Now, don’t get me wrong, similar is not identical, but the tile system that is running with Android on  Samsung’s product on the show floor is somewhat similar to Windows 8 UI. But other than that, a lot of reviewers at the trade show had reported that for the first time since a while, Samsung’s tablet did not show any sign of major lagging or tripping up while being tested. This is a good sign, now we can’t be sure that Samsung has solved the software issue that has been bugging the users, we have to have one in our hand to make a judgment, but from what we can see, we can expect a better performance from their skin when they are running on top of Android.

Now, does this mean that Smartphone will get a refresh in their UI too? Well, some might says that Magazine UI was built for big screen devices like tablet to take advantage of the screen real estate. But, as we know Samsung, they do like their product to be uniform with the same UI, so this could mean that for their later products, like the Galaxy S5 or the Note 4, we can expect a change in their UI. In addition to that, a rumor has leaked some screenshots of the new UI we might see in future devices.

We are only speculating the future, but the million dollar question is will Samsung next flagship, the Galaxy S5 will have this same UI as this? Also, if you notice, the date on these screen shots are saying October 16. Now, there is no way of telling how old these photos are, but if this is true, then by calculating, this confirms the rumor that Samsung was working on the Galaxy S5 earlier and we might well could be seeing the Samsung Galaxy S5 very soon.