As we already know, at MWC 2015, HTC will be announcing the next generation of the HTC One M8. Then so, with the tag line “Utopia in progress.” Peter Chau, CEO of HTC, announced the brand new HTC One M9, alongside with some of the newest products to go with this aim for perfection. So let’s dive in.

With the model “we build products to be loved,” the HTC One M9 design is to be “exceptional.” With the familiar curve and the hand brush metal touch, HTC gives the familiar yet premium feel to the HTC One M9. From the front, there is not much different from the previous model. Contrary to some rumors, the iconic Boom Sound’s design stays the same, as well as the position of the front facing camera.

With the re-word on the new camera, of the few weaknesses of the HTC One M8, the company has gone all out and put a 20-megapixel sensor, with the “latest BSI technology.” We also have sapphire glass to protect the camera. HTC has put in a new photo gallery, combining all of your cloud storage, to ensure a greater experience in finding your photos, no matter where you stored them in. Face recognition was also utilized for organization in the gallery, so that you can have an album of just that person; the feature dubbed “Image match”. New improved editing features allows you to  do all sorts of things, including the double-exposure, charismatic, etc… Turn around to the front, we got the 4-ultra pixel camera, allows more light even in darkest scenario.

Software side, Sense 7 has been redesigned to revolve around you. Sense’s newest feature, Home Widget, will now track where you are, at home or at work, and adjust your home screen to match the environment. It will also be available for the HTC One M8

On the spec sheet, we got the Qualcomm Snapdragon 810 SoC, with HTC Sense 7 run on top of Android. Boom Sound is here, with Dolby help, the pair of speakers will now deliver 5.1 surrounding sounds. It is now, also easier to transfer your media consumption to the big screen and the big speakers in your house, with Airplay, swipe 3 fingers to the top. We also have 3GB of RAM and 32GB of Built-in storage (expandable up to 128GB via Micro SD slot). 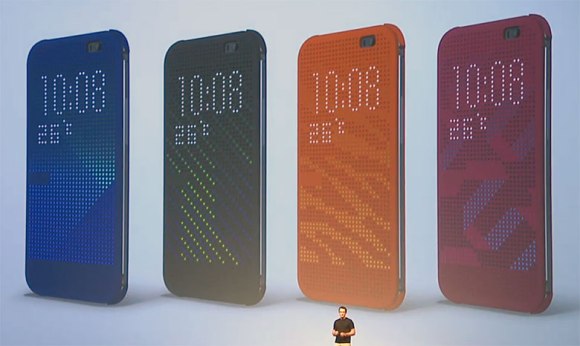 DotView is back, now allows you to play games, and create a new design for your Dot screen.

HTC also added some new colors to the options. Starting in the middle of this month, the phone will be sold in North America with the color options: Silver, Gun Metal Gray, Pink and Gold.

Other products include HTC new fitness band, the HTC Grip, which does what most fitness bands do. Track your heart rate, movements, and a boatload of sensors.

We also got the HTC Vive, the company’s first VR headset that is the result of its partnership with Valve. 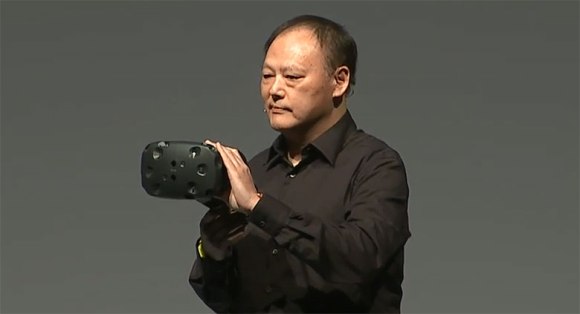 T-Mobile, Sprint and AT&T have publicly announced to carry the device. AT&T will also be carrying the HTC Grip