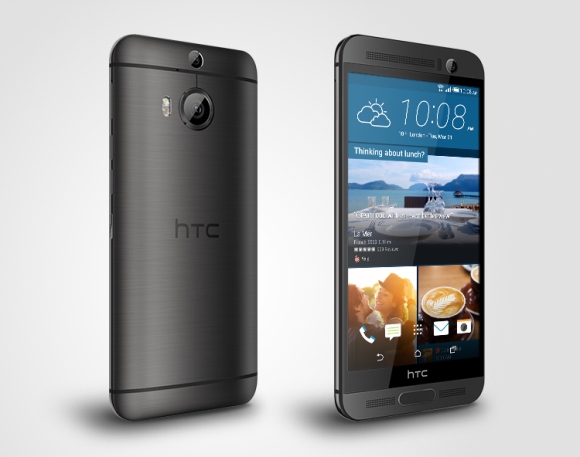 After a few months of endless rumors and leaks, HTC has finally put the finishing touches on its flagship phablet for 2015. The release, while did not involve a big unveiling event, did confirm a lot of the rumors we learned over the weeks. From the fingerprint scanner to the Duo-Camera. All are featured in the brand new HTC One M9+.

Just like we expected, from the outside, the phone looks exceptionally similar to the HTC One M8. Of course, we see the return of the Duo camera; however, this is a 20-megapixels sensor, and the UltraPixels shooter has been moved to the front.

The spec-sheet is also not far from its sibling, the HTC One M9. On the surface, we got a 5.2-inch LCD display, with Quad HD resolution (1440×2560). Underneath it is the rumored MediaTek MT6795T Octa-Core SoC, clocks at 2.2GHz. Accompany that is 3GB of RAM and 32 gigabytes of internal storage (expandable via MicroSD slot). Boom Sound is also back, and between the bottom speakers is the fingerprint scanner. Noted that it is not a home button, Some payment option will come with this scanner, but will only available in China at the moment.

On the subject of availability, the handset, as of right now, will only be available in China, with other markets to follow. One official said that “the One M9+ is not currently planned to be released in North America or Europe, where we believe our flagship HTC One M9 is the best choice for blazing fast performance, incredible sound, and network compatibility across the broadest range of operators.”