After Android and Apple dominated the first quarter of this year, it is now time for Microsoft to showcase its plan for Windows and other services in 2016. The show is recorded and can be view on Channel 9.view on Channel 9.

There is one rule for any presentation by a big corporation: Brag. And boy, does Microsoft have some impressive stats to show us today. The company claims that as of today, more than 270  million users have upgraded to Windows 10. Windows 10 is also the fastest Windows OS to get adopted by users. Furthermore, there are now at least 500 devices (PC, smartphone, laptop, tablet) being announced and available to consumers.

Microsoft has also continued to improve Windows 10, in a new update called Windows Anniversary Update, which will be free for Windows 10 users to upgrade to. So, what does it include, let’s dive in! 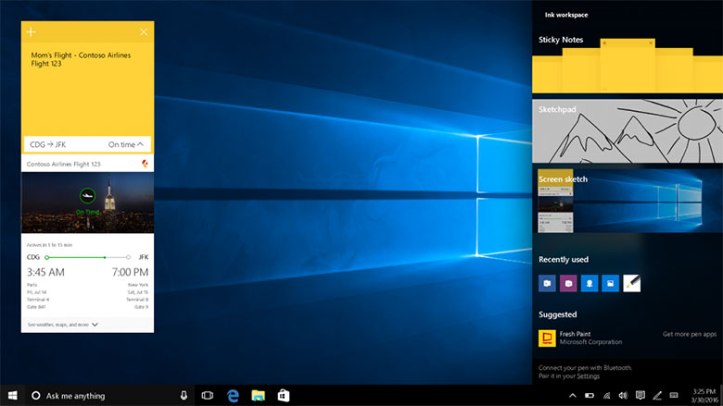 It seems like Microsoft is focusing on bringing pen usage to a new level with a new system called Windows Ink. At least on the Surface devices, you can now take note from the lock screen with the click of a button at the top of the pen. Sound familiar? Yes, because the feature was announced last year. However, this time, it won’t bring you straight to OneNote anymore. Instead, a panel showing the most recent notes/sketch you took or drawn, as well as your Pen-compatible apps (and suggestion from the App Store, of course). Additionally, new tools like a ruler is now a part of not just OneNote, but in Windows as an OS. OneNote is now also connected with Bing and Cortana, so your “sticky note” will be recognized by Edge and Cortana to create reminders and searches. To make the pen smarter, native apps like Maps has now cooperated pen to make the pen more useful outside of the note-taking platform.

Of course, since this is a developer conference, coding Windows Universal Apps were mention by Microsoft. While I won’t go into details, here is a summary. Microsoft has provided tools in Visual Studio to bring Web and x86 apps to the Windows App Store. The company is also focusing on bringing the two gaming platform, PC and Xbox together. The newest version of Forza will be available on both platforms in the Universal App store, and you won’t have to buy it twice if you have both. Also, now PC players can play with Xbox players, which is kind of cool.

Since Microsoft’s last Build event, Microsoft has put a price tag on the development kit for the device. However, it has not shipped, Until today. For the just a “small price” of around $3000, you can get yourself a Hololens development kit as well.

To demonstrate its usefulness, Microsoft invited Western Reserve Medical School to give a lecture on human anatomy and brain. Hololens help creates holographic contents for students to understand all the lesson about the human body.

Well, while it might not be the most modern voice assistance, Cortana is sure trying to be one. Microsoft has made some improvement to the voice assistant.

First and foremost, Cortana is now accessible from the lock screen. In addition, more integration has been done for her to work with Outlook to recognize conversation, flight details, reminders, etc… Cortana can now also recall the memory from the past. The demo at Build shows that Cortana can remember which toy store you went to in a particular city you have visited before.

In addition, Cortana can also access Skype, help the user contact a hotel reservation bot to book a hotel room.

How do you feel about Microsoft’s presentation so far?