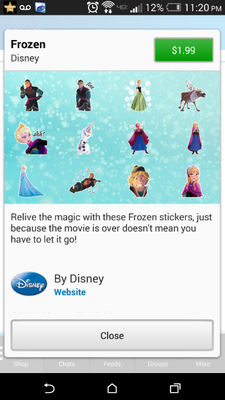 “Let it go, Let it go, can’t hold it back any more…” Damn, although the movie is quite overrated, you can’t deny that the song is so darn catchy. So, Are you the fan of the Oscar-winning animation? Well, BlackBerry obviously does, and to share its own interest, now the BBM is now offering you stickers with the characters from the movie Frozen.

Available at $1.99 in the BBM Shop, BlackBerry believes these are larger and better than emoticons. Of course, like any other stickers, you can include it with the message you about to send. Also, my favorite, Toy Story sticker package is also included. Monetizing and allowing companies pay to sponsor discussion on BlackBerry Channels are some of the steps that the company is taking to bring the messaging app to the level of Whatsapp.

Although BlackBerry 10 is having its own problem BBM is still growing. So, anyone buying the stickers?