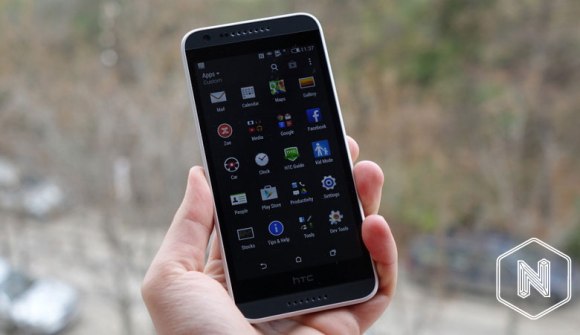 For a long time now, since the introduction of the HTC One X, the Desire line has taken a low step of being just a mid-range series, the announcement of the Desire Eye changes that perception a bit. However, with the commitment of making the One series the flagship line, the Desire will, once again, take a step back to the mid range territory. Earlier this year, we see the reveal of the Desire 610, and it seems like HTC is ready to introduce the successor to the Desire 610 with the Desire 620 that just got leaked by Nexabal.

As you can see, the Desire 620 has a design that inspired by the 816 and its predecessor, the 610. As of right now, the source has pulled down the post, so there is no way to prove the legitimacy of the leak, but the design of the phone looks to be similar to other sibling of the same series, making the odd of this happening a bit higher. As for what will be featured on the device, from various rumors, we can expect a Snapdragon 410 64-bit SoC supported by a gigabyte of RAM and 5-inch 720p display. We might also see a 5MP front-facer and 8MP main camera. For internal storage, the expectation is 8GB with a Micro SD slot. All of this will be powered by a 2100mAh battery.

While this is nothing too impressive, the phone specification suggests it to be a decent mid-ranger that is planned to be launched in January for the price ranged at about $320.

Reblogged this on Today Technology News.