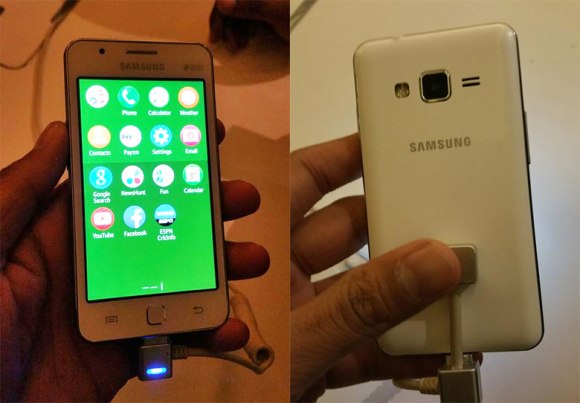 As this year comes to an end, we have the habit of trying to predict what would come next. So, to starts the week of prediction, let’s have Samsung. While being one of the strongest players in the Android world, Samsung is apparent with trying to get away from Google with Tizen, as their newest flagship wearables all running Tizen. However, Samsung has only one device running the operating system right now, so to change that, it seems like Sammy will add more weight to Tizen lineup with another device set to be announced next month.

According to the source, Samsung has been working on an entry-level Tizen device called Z1. Spec wise, on the surface, we got 4-inch WVGA display. Underneath we got 768MB of RAM to support an unknown SoC. Around back we got a 3.2MP camera and while the picture shows that the device has a front-facing camera, we are yet to know the specification of it. The phone is set to be released in India on January 18th of 2015.

One more important thing, the phone is going out for the price of $90, meaning it will be competing with companies like Xiaomi in developing markets. After India, China will be the next market with the date of Febuary 15th, and then Korea before the second quarter.