It seems like Microsoft plans for mid-range devices, or in its own word, “affordable flagship,” will be extended to next year. As many have predicted, we might not see a flagship until the autumn of 2015, meaning most of next year will be series of mid-rangers. And what’s a better way to start the year with the “affordable flagship”in the size of a phablet?

Earlier, I reported on a Lumia 1330 is in the work and set to be announced early next year. And now, with the help of GFX Benchmark, we just confirmed the specifications of the handset. 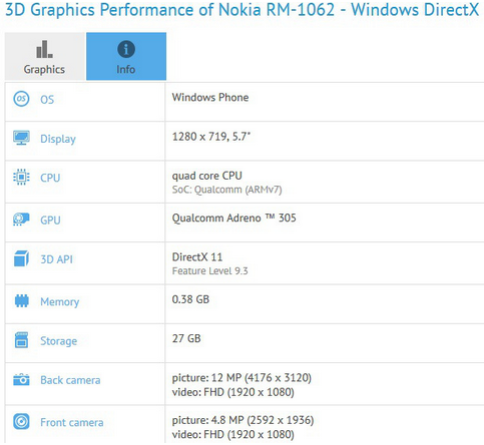 The device code named RM-1062 is believed to be the Lumia 1330, and it features a 5.7-inch 720p display. Underneath is a “quad core CPU,”which most likely is the Snapdragon 400 with the Adreno 305 GPU accompanied. It has 32GB built-in storage and 512MB of memory. We also got the confirmation on the 14MP PureView camera that will be featured along with the 5MP selfie camera.

So, what do you guys think about the new “affordable flagship?”