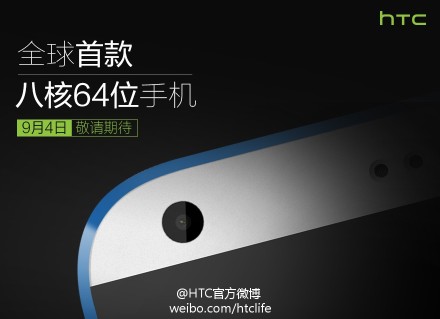 After Apple, it seems like HTC will be the next one to step up to the 64-bit smartphone games. We have heard that 64-bit SoC is being developed by Qualcomm, Samsung, and even LG, but we would never expect HTC will be the first one to enter the 64-bit game with its teaser on the Chinese blogging page, Weibo.

The teaser does not reveal much about the processor chip, or which phone it is. All we can take out of this is that the phone will be released at IFA, on the 4th of September. Now, there have been some speculation that if it is the Desire 820 that HTC has been hinted at for awhile. Now, say it is a Desire, meaning that this is a mid-range handset, and we know that Qualcomm has been working on a 64-bit chip, and the fact that the teaser point at an eight-core processor hints at the Snapdragon 615.

So, what do you think about a 64-bit Android device from HTC? Tell me!