Windows 10 Review: One for the Win!

Even know the Windows 10 OS is just coming out today, we here at Fonetime have been testing it since the first preview version come out. After numerous updates, we are not enjoying the official release of Windows 10 OS for Desktop, Laptop and Tablet above 8-inch. To make it short, this review will just shrink down to two parts: The good and The Bad. Let’s dive in!

*Editor note: The reviewer uses the first generation Surface Pro to write the review. The age of the hardware components may have affected the user experience.

The Good: The One, the only RULE!

With this OS, Microsoft is determined to fix the damage that is Windows 8. The confusing two interface, the disjointed experience between desktop and tablet. The always confusing control panel and a whole lot of issues from the OS. Well, in short, Windows 10 is here to fix what you hate about Windows 8. 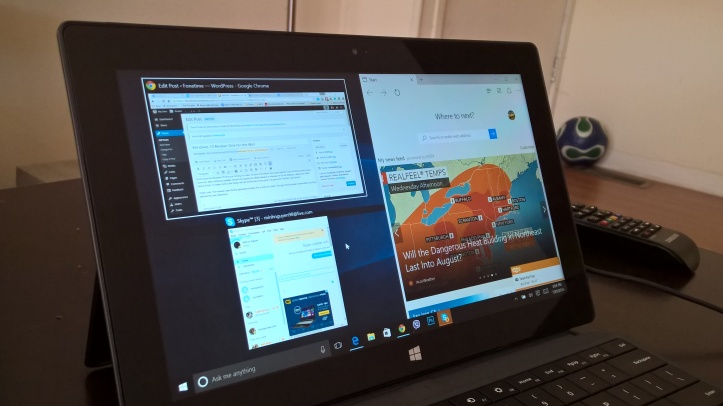 With the new version, a single interface works MUCH BETTER than two different interfaces. If you were on Windows 7, you might not know what we are talking about, but it was a huge problem. For example, if you run Pandora on the native IE, as soon as you put it in the background, the music stop, because technically, that whole tab stopped. That is because the app and the desktop run on two different interfaces. Well, no more! The unified interface desegregates the desktop apps and the ARM apps from the Windows Store. On the topic of unity, a single control panel certainly clears up the confusion from the old two-setting menu system.

Also, the new split screen functions, four windows, and the Task View are easy to use. Similar to Mission Control from the Macbook, this allows you to switch quickly windows and arranges them easily. The ability to have additional desktops is also very helpful, enables you to create more space for your desktop. On the topic of multitasking, the fact that there is only one interface makes modern apps and desktop apps behave the same way, whether you are in PC mode or tablet mode. In each case, both sets of apps behave the way you expect them to. For PC mode, you have the familiar tab bar with minimize, expand and close button. For tablet mode, all apps behave in the modern design, meaning the return of the Snap feature, and it works the same way it does in Windows 8.

Cortana is here as well, operates as well as it does on your phone. Of course, the shortcoming remains Bing’s problems. Voice recognition is a lot better after more than a year in Beta. Another new feature is Microsoft Edge, which works fine, but still has a lot of problems, which we’ll express later on in the piece. The central idea is that Microsoft Edge is still better than Internet Explorer.

Other small features include the Action Center, with quick settings and a notification center. With the OS in-sync with your Windows Phone, information that cleared on your phone will also disappear on the PC and vice versa. Believe it or not, the feature is more helpful than you thought.

Aesthetically, the new design for Windows 10 is quite pleasant. Even know I did not buy into it right away, having live tiles in the Start button makes a lot of sense. And the transition from PC to tablet mode is very smooth. With this new version, Microsoft has finally found the balance between desktop and tablet mode for Windows.

The bad: Fixing what is working

As always, Microsoft always goes one step too far in the other direction while they fixed their problems. Just like my impression with Windows 10 Mobile, I feel like Microsoft has thrown away a lot of the things I liked about Windows 8. 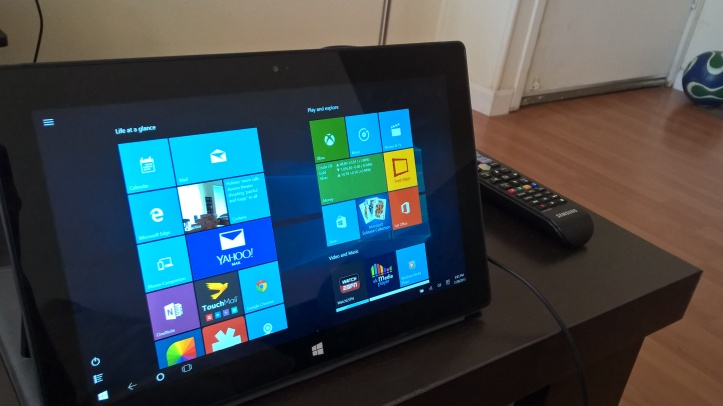 The horizontal scroll of the Start screen has also been replaced with a vertical one on tablet mode. Now, it would make sense for a vertically focused tablet; but for a horizontal tablet like the Surface Pro, the experience has become an awkward experience for users (At least for me). However, the rational that Microsoft stated is understandable, and while I don’t like the change, it makes sense. For a tablet, you will most likely be holding it on the left and right edge of the screen, so vertical scrolling is easier in that sense.

Microsoft Edge is, in a lot of ways, a massive improvement over the Internet Explore. However, the browser itself is still slow and laggy. Plus, the fact that there is no plug-in for the browser at the moment makes it a generation behind other browsers like Chrome and Firefox. However, I expect the situation to change soon as the browser becomes more mature. On the topic of fixing what works, Microsoft has also removed the gesture from IE to pull the page left or right depend whether you want to go backward or forward. This is an incredibly odd choice, seeing as how well it actually works; even Chrome, the browser power house, adapted it.

On tablet mode, Edge becomes more disappointing for me. Even know Microsoft caved on Windows Mobile to put the navigation bar to the bottom, they did not do that with the Windows 10 PC version. Microsoft stopped trying and follow the trend of putting everything up top where it is harder to access, especially on a tablet.

Finally, it’s inconsistent across the OS in the design philosophy. Just from the look, you can see the conflict Microsoft has with itself about how it would create the OS, the effect from relying too much on tester feedback. Just talking about built-in Microsoft apps strictly, there is no consistency. On some apps, the setting will have the Hamburger icon. On others, they have the three-dot icon from Windows Phone 8. The position of the navigation bar is also varied from apps to apps. The inconsistency creates an unnecessary learning curve for the users.

Well, the obvious question is: “Should I get this upgrade now?” And to that I say: “Slow down.”

Here is the thing: Despite the shortcoming, I still think that Windows 10 is a great upgrade, and even if you love your Windows 7 right now, you still should get an update, but not right away.For one thing, although it is the full version, lag and bug are still there. For the moment, I cannot even turn the screen vertically, which I presume is a bug that will be fix in the very next update. In good conscious, I cannot recommend you to upgrade right away due to all the bug and lag. But the problems should be fixed very soon. Until then, look out for the next build and stay tuned as I will update with the latest.