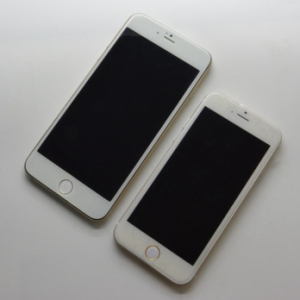 The closer we get to the yearly launch of the iPhone, the more leaks we get, and although it’s never a bad thing, it is getting old. As we know so far, the iPhone will probably have two variants, and 9to5mac report yesterday (as most reports do about the iPhone 6) was confirming it, as they deliver some leaked photos of what appear to be dummy units of these two variants in two colors.

Nothing surprises us in these pictures, the two variants seem to have similar design (except for the size), with this, will have the similar color option. In the market now, with the iPhone 5S, we have Space Gray, Silver and Gold. In the leaked pictures today, we only see a Space Gray (or black) and gold. The Silver version is still MIA in the wild. Design wise, even the smaller variant will most likely have a bigger display than the current iPhone, at 4.7-inch. The bigger one as reported, will be at 5.5-inch. One thing worth noticing is that the power button has been moved to the side of the phone on both variants, which does make sense because as the phone gets bigger, Apple would like to move the button to a more convenient place for usage.

Screen sizes will not be the only new thing. Reportedly, just like every year, Apple will upgrade its processor, and the A8 allegedly will more efficient in improving battery life for the iPhone. On the display, because of the new size, Apple has to have a new resolution, and they are testing the screen at 1704×960, which practically is 1080p, but it is not clear that this will be on one variant or both, but if I have to guess, it would most likely be on both of them. Of course, both of these phones will run full iOS 8. In previous rumors, there have been leaked information that tells us about how Apple plans to launch these two variants differently, but at the same time period, the fall. As for the iWatch, there were a lot of mixed reports about its availability, no one knows for sure if it will be launched this year in the fall or the Spring of 2015.