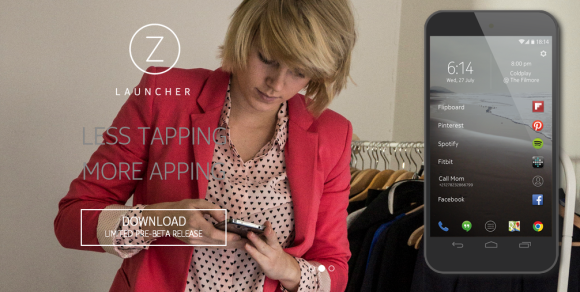 So… Most of Android users learn to use and love launcher, after all, nobody can live with Samsung TouchWiz forever right? Well, the last time we saw a big company releases a launcher was almost a year ago, the Facebook Home. An awesome idea for Facebook users to have quick access to Facebook right on your Home Screen. Well, the launcher, although it had quite a potential, the launcher failed short to convince people to install or buy its very own phone, the HTC First. Well, now is Nokia’s turn to take another shot at making launcher.

BUT HOLD ON, JUST HOLD ON, “I thought Nokia…, Microsoft…, Windows Phone…!” What is up with Nokia and Android? The deal is already done, right? Well, calm down now, the Z launcher is coming from the part of Nokia that Microsoft did not buy, the Nokia’s technologies group.

So, what is this launcher all about? Well, the fundamental intention is “Less Tapping More Apping.” What the hell does that mean? Okay, the Z Launcher would going through a boat load of your apps, sort it, and then gives you a clear, relevant list of apps, contacts, and reminders on your home screen. As the Z Launcher learn your way of using apps, it learns your activity pattern, and as so, throughout the day, the home screen’s content will change to accommodate your needs.

What about those apps that did not make it to the shortlist, where does the apps menu go? Nokia has created a list of apps for you that is similar to Windows Phone’s list. The company also integrates basic handwriting recognition. Say if you want to play some Asphalt 8, but it’s not on the short list, just draw an “A,” and a list of apps that match the letter will appear. Just tap Asphalt 8 and you’re done.

Now, on their website, Nokia is launching the “pre-beta” supporting some of the newer model that is running Android 4.1 or later. The company states clear that availability is limited, so I’m going to assume that you read this before the link got taken down, GO GO GO. Download it and try it out if you are curious.

One reply on “Nokia releases Beta for its launcher Z”

[…] still involved with, Here suit might be coming back with the brand, or new technologies, or even an Android launcher, as the company is expected to make profit on the three divisions in a very short […]