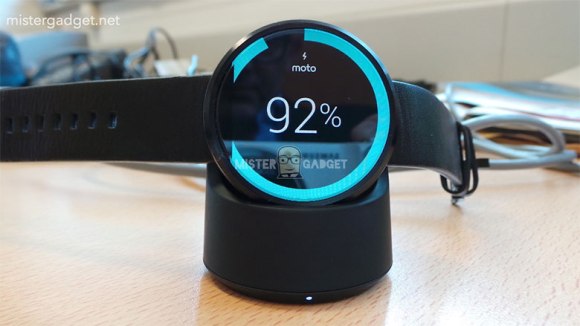 This is nothing new, folks. One of the first rumors that spread out back when Motorola announced the Moto 360 is that it will have a wireless charging method. That became more obvious with the fact that at Google I/O, while having some hand-on time with the Moto 360, tester realized that there is no port for charging at all. Although we all sure that the Moto 360 will have Qi charging compatibility, the company has not said a word about this. Luckily, a 360 users has revealed some image about this round smartwatch and how it restores its battery.

Right out of the bag, the metal backplate with many of the Moto 360’s features printed out, things like: water resistance, stainless steel build, wireless charging, and a heart rate sensor? The charging stand and charging method itself is nothing to surprise, but it is quite compact, and use the upright position for charging. While everything is looking well and good, the “bezel” that make the Moto 360 not quite circular  eclipse some of the information on the progress indicator bar, occur at around 70-80 percent, as you can see above.

This tester is also generous enough to provide us some comparison picture with the 360 and the LG G Watch, and although a lot of us thought that the wristwatch will be considerably thicker than the rest of the Android Wear devices, it turns out that the Moto 360’s thinkness is just about the same as the G Watch.