Despite the fact that Motorola did not do too well in the sale department, the phone itself is a fantastic piece of hardware and receive praise from various credible tech sites. Well, if Motorola (or, in this case, Lenovo) keeps up with the same timeline from last year, we should should see the launch of the Moto X very soon, maybe in the fall. But even if it is a whole three months away, leaks images have emerged on the net by Total Tech (AKA TK Tech). 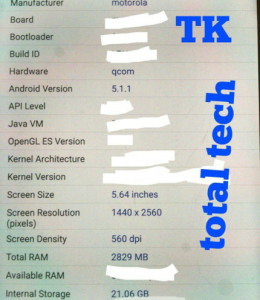 The source believes that the next iteration of the Moto X will be a 5.64-inch display with the resolution of 1440 x 2560. As of right now, the source did not confirm the SoC, only saying that it is a Snapdragon chip.SoC, only saying that it is a Snapdragon chip. The spec sheet that the YouTuber provided reveals that we will have an odd 21GB (it is possible internal storage and 3GB of RAM. A possibility of a Type-C USB port was mentioned in the video. As of right now, this unofficial hardware is running Android 5.1.1, and the variant that the source has is the wooden back, although it is believed that different versions of wood, plastic, leather, and even some new materials will also be launched with the phone (Denim maybe!?)

Phone Arena also has some insight into the situation, claiming:

PhoneArena claims there will be two versions of the Moto X 2015: a 5.7-inch QHD version as a Verizon exclusive, and a 5.2-inch QHD variant for the rest of us.