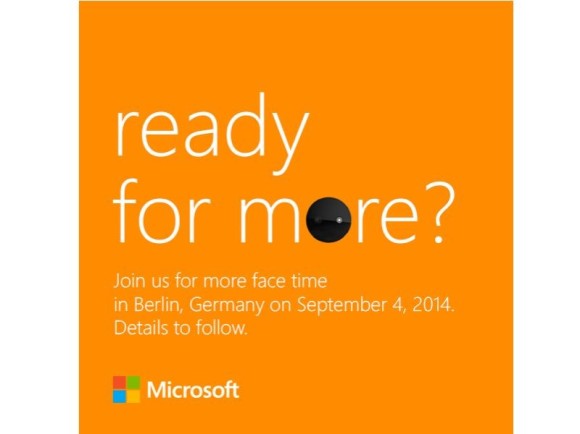 IFA is when a lot of companies release phone, it is one of the most wonderful time of the year for the tech world, and we expect to see Samsung, Sony, LG, etc…, to be there, and there is one more that were absent last year, Microsoft, but this year, they came back with Nokia for some new handset made from “Nokia by Microsoft.”

A lot of news outlets have received invitation to “save the date” for their IFA event in Germany, September the fourth, and indeed this will be for “more” device, as you can see from the familiar camera lens that has been leaked a few weeks ago, known as the Tesla or the Lumia 830, which were expected to be an affordable high-end phone. Also, the invitation mentions “more face time,” which can be a hint of the selfie phone, the Lumia 730, which has been reported by WP Central to have a 5MP front facing camera.

Stay tune, because even know I won’t be there, I will be covering it from far away.

2 replies on “‘Ready for more?’ From Microsoft, well, be at IFA”

[…] This phone is expected to come to all three biggest carriers in the US, and it is surely will be revealed on September 4, at Microsoft’s IFA event, with its sibling, the Lumia 730, rumored to be a selfie phone.  […]